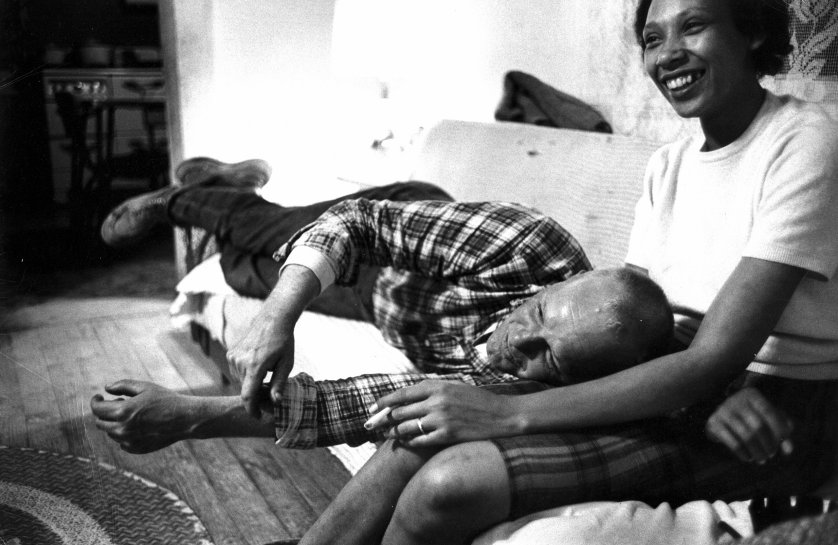 In light of it being Black History Month and Valentine’s Day around the corner. I thought I would highlight a couple whose love changed our nation as we know it. Mildred and Richard Loving are the reason we are permitted to have interracial marriage today. That’s not to say it would not have changed eventually but they were the ones who fought and won to be seen as man and wife. This is especially close to my heart as I am in an interracial relationship myself. Their courage has saved my partner and I a lot of heartache and frustration. As well as normalized the fact our love is no different from anyone else. Of course the fact their last name is Loving makes the story just a little sweeter.

Who Are Mildred and Richard Loving?

Richard was white man living in a farm town in Virginia. Mildred, a black and native american woman, was from the same small town. She was sweet and shy, he was a bit more gruff and quiet; they had known each other since Mildred was 11 and Richard was 17. They came from one of those towns where everyone knew each other and their business. However, their town was a tad unusual for the South. It was common for the diverse community to come together and just hang out.

Richard and Mildred were said to have dated intermittently over the years, however when Mildred got pregnant they went to DC and tied the knot. They knew it was illegal to get married but returned home to Virginia anyway. That’s where they grew up and all of their family and friends were there, that was their home. The Lovings weren’t seeking noroterity or trying to stir up trouble, they just loved one another. They wanted to raise their family at home, together. By all accounts, they were intensely private people but they did not want to live without each other. They just wanted to live in the place where they grew up. Mildred and Richard Loving knew in their hearts these laws were wrong and worth fighting against.

It’s important to note two things. One being that it was illegal to marry in Virginia because of the Racial Integrity Act. Two, this is happening as the civil rights movement is gaining traction and garnering more attention.

Now back to the Lovings, the sheriff came to their home at 2am and woke them demanding to know why there were in the same bed. They were arrested and the judge gave them two options: be exiled from Virginia for 25 years or jail, so they fled to DC.

They were never happy though, they came from a small town and they got big city.  When they did go back to Virginia to visit their family, one always had to hide away or go alone. The Lovings knew they could not live like this. So one day Mildred decided to write Robert Kennedy a letter about their situation, because she’s a boss, and he told her about the ACLU. Just like that, they decided a enough is enough. I mean, I know it was not an easy decision especially for two people adverse to the spotlight, but they knew it needed to be done.

Two lawyers from the ACLU took the case and they were back in front the judge who kicked them out in the first place. In my opinion, he was the last person this case should have gone to but he then said something incredibly stupid. When he declaring his ruling he said, “Almighty God created the races white, black, yellow, malay and red, and he placed them on separate continents. And but for the interference with his arrangement there would be no cause for such marriages. The fact that he separated the races shows that he did not intend for the races to mix.”

Prejudiced much? They were denied once more before LIFE magazine decided to do a featured piece on their story. Believe it or not it was 1967 when the Supreme Court final heard the case and decided Mildred and Richard Loving had a right to be married, just like everyone else. After the Supreme Court decision they were able to go home.

It’s been 52 years now since the Lovings historic case. They made it less taboo to date someone who is not of the same race. Andrew and I were profoundly lucky this happened well before us. It is crazy to think it has been 52 years, we have grandparents who are alive and old enough to actually remember this taking place. But it’s not just myself, there are thousands of couples around the country who can be with the person they choose because of them.

Unfortunately Richard passed just 8 years later in a car accident and Mildred passed in 2008. Before Mildred’s passing, in the height of the same-sex marriage fight, she said “I believe all Americans, no matter their race, no matter their sex, no matter their sexual orientation, should have that same freedom to marry. Government has no business imposing some people’s religious beliefs over others. Especially if it denies people’s civil rights.”

Because the Lovings chose to fight celebrities like Serena Williams, the recently wed Royal couple and John Legend & Chrissy Teigen have been able to live and love one another out in the open. Also average joes, like myself and my parents (who are also an interracial couple) are able to live and build a future together without being concerned about the sheriff kicking in our door.

However there are thousands more who can’t so, there’s work to do however Mildred and Richard’s bravery has showed us it can be done. It took just one couple to make a huge difference and change our country altogether. So whoever you are and whoever you love, love them hard. Love them honestly, and enjoy Valentine’s Day together!

I wanna hear from you, share your love stories below!